Well I’ve been busy, and by busy I mean working feverishly to accomplish  in a week what it would take an actual carpenter a day to accomplish. The last time I wrote I was pulling up the sub floor under my future bathroom. So how’d that go you ask?

All right, so you didn’t really ask, but screw it, you’re here so I’m telling you anyway. Removing the subfloor was a breeze. A circular saw and a variety of pry bars makes quick work of it (if you’re  looking for help with yours, try this). After the subfloor was out I was able to venture into the veritable Shangri-La of fiberglass particulate and claustrophobia that is my crawlspace.

Crawlspace Adventures (or How I Learned to Hate my Cats) 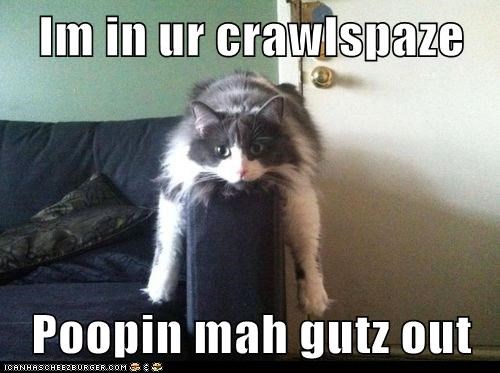 Let’s get this out of the way now, and I can’t stress it enough:  cats and remodeling don’t fucking mix. There, I said it.  Before you start tearing your house apart I strongly suggest you take little Ms. Whiskersbiscuits  to a farm up north, and by farm up north I clearly mean glue factory. As soon as the gates were open to the magical caverns below my house, the cats insisted on being down there doing who knows what. But I digress.

I wanted access to the crawlspace from above because it’s too shallow for my barrel chested self to work in from below.  My first task was to remove some old wiring. This turned into an all day event when I found a wire just sort of hanging out down there and decided I needed to find out where it ended.

This wire had no juice, mind you, but I was terrified that somewhere along the way it was connected to a switch and I didn’t want a live wire hiding out down there just waiting to burn me and the dog down to cinders.  Two additional holes in my house later I found it connected into a junction box hidden in the crawlspace about 15 feet over on the other side of my house where I have no intention of demolishing anything for quite a while (and the crawlspace is actually too shallow to, you know, crawl).  Thanks to some ass hat hiding a junction box where they shouldn’t have, I was forced to bury my own.  At least the wire is protected now if it’s actually connected to a breaker.

The next item of business was plumbing.

Well you see kids, when a man and a woman, another woman with a penis, a midget, and a donkey love each other very much…

No no no, PEX!  I’m terrible at working with copper pipe, and with a better product on the market I found myself lacking the motivation to get any better.  PEX is a flexible polyethylene tubing that can be used in conjunction with copper or completely replace it.  Each fixture gets a direct run from a manifold, which distributes water in a way not unlike the way your breaker box distributes electricity to your appliances.

The upshot of using PEX is that it’s dead simple to install. The fittings are crimped onto the hose using metal rings, a special crimping tool

, and a gauge for testing the fit.  The downfall is that it’s a little bit of an investment to get started. If you choose to go with an all PEX system, dem shits

Since I know next to nothing about plumbing I also decided to do a little light reading and picked up Creative Homeowner’s Plumbing: The Ultimate Guide.  It takes all the guesswork out of choosing supply line and drain sizes, and how to size and place drain vents.

After herding the cats out of the crawlspace I installed the new sub floor, and for added stability I installed an additional layer of 3/8″ plywood over it.  Nothing interesting to report here.

I picked up a single-unit bath/shower from my mom’s boss a few months ago.   I had to remove a door from the hallway to get it through the house but I think in the end it will be worth the effort.  Unfortunately it came with no measurements or instructions, but after locating the company’s phone number they were kind enough to email me everything I needed. Tonight I framed in two small walls that the shower will be fastened into.  The space it created is 33″ x 60″ and perfectly centered in the room.  On one side I’m going to create an access panel to make working with the plumbing a breeze in the future, and on the other side will be a small closet.

Finally ready to move in the shower and frame in the back wall.